SEWA VENTURES IN ANOTHER DIRECTION

The year 2003-2004 saw achievements of children on the academic front of many of the RECCA 78 members.But some of 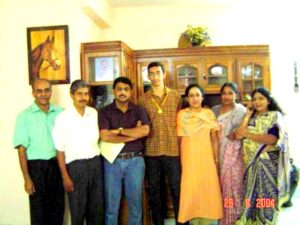 them were the distinguished achievements of Kripa Susan Thomas daughter of Late Thomas Joseph ( Chairman REC in 1997-98) and  Fayaz  Mansoor son of Late Mr Mansoor  ( Recca78) , who both secured distinction  in SSC and HSC respectively in the Academic year 2003-2004.   We thought  that charity should begin at home and  decided to acclaim their achievements (despite the absence of father figures in their life), by presenting them with Gold Coins. worth Rs 10000+ .  A few of our members took time off from the get together planned at Cochin  on 26th Jun 2004 and arrived at the residence of Fayaz and appreciated his effort by  presenting  him with Gold coin(Medal)  . Our SEWA activity at Kochi was pursued further  by  awarding gold coin to Kripa Thomas  too the next day