On the 16th of August 2004 , the anniversary day of SJ Reunion Meet of Recca78 We  presented ‘onakkodi’ to Valsan and Sangeetha (both HIV +) and their 3year old son Anugraha. They were  under the care of  Cancer  and  AIDS Shelter Society (CASS ) ; Kudamaloor Kottayam   and  run by Sr Dolarus . On hearing that CASS was  planning to celebrate  Onam   on 21st Aug   for their potients SEWA   representatives  reached   CASS centre    as representatives of REC, Calicut,   volunteering    to  present   Onakodi to  all its beneficiaries.  . 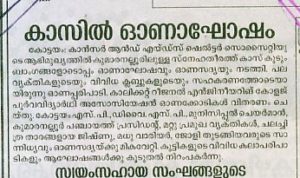 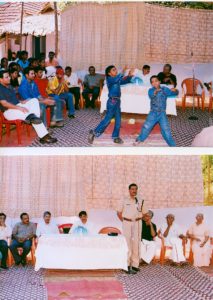 The function included    variety entertainment program  staged by the members of CASS interspersed  with messages on Onam  by invited  dignitaries .    Suresh Kurup (MP) , Thomas Chazhikadan (MLA) , Municipal Chairman, Councilors, Panchayat President, Supdt of Police, Dy SP,  George Mathew ,GM of  MRF, Mrs. DC Kizhakemuri etc were some of the dignitaries besides  representives form Lion’s, Rotary, Y’s men, Interwheel Club and so on  .  In the message our president described how and why    SEWA society was formed,  its relevance in the present day situation,  and our mission of  restoring  smile on  faces of all.

The  formal meeting and entertainments was followed by  sumptuous Onasadya, sponsored by young stars from film world like Madhu Varrier and  Jishnu ( Nammal fame and a Mech graduate from REC calicut ( 1998)  ) . Thereafter kits containing  10 kg of rice, provisions, oil, payasam along with Onakodi sponsored by SEWA   was presented to the beneficiaries. Though our contributions were meager it was valued highly by all since it was voluntary.